In any game, there is no war without any weapon; therefore, in Super Mecha Champions you have different types of weapons and vehicles to maneuver the game. In order to eliminate enemies, all you require are the strong weapons that not only make a strong battle but also help a lot in dealing with different challenges. One thing more, that the use of weapons may differ from person to person. 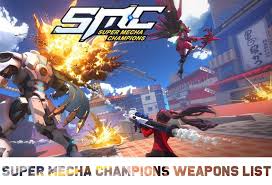 Let’s have a look at different types of weapons available in Super Mecha Champions.

Assault Rifles are the most preferred weapons in Super Mecha Champions having a stable fire rate and range with excellent performance. This weapon must be used carefully as even a Mecha can suffer huge damage as a result of its sustained fire.

Mini SMG has a pretty good fire rate along with providing somewhat satisfactory stability. The major benefit of using Mini SMGs is that such kind of weapons is quite compact and easy to carry. This makes it one of the preferred weapons among mercenary groups.

Sniper rifles are semi-automatic weapons which are highly capable to produce highly destructive. This weapon comes with optical scopes, thus making it easier for you to aim your target accurately. In addition to this, such weapons are quite deadly at long range. So, if you want to target your enemy standing at long distance, Sniper rifle is the best choice.

This shotgun is a large and powerful pump-action weapon which fires with star-shaped rounds. It is a highly effective shotgun that works great as a deadly anti-mecha and anti-pilot weapon at the short-range. Unlike Sniper rifle, this shotgun gives effective outcome at a short distance target.

Homing Missile comes with a smart sight which is highly capable of tracking even the heat signatures of your enemy Mechas, it hides the friendly units.

Ion Cannon has a micro-plate accelerator which has the ability to generate a huge amount of energy and can do huge damage to the enemy. When an Ion Cannon is fully-charged, it shoots plasma beams which are of high temperatures, enough to cause extreme damage to any kind of electric equipment. The nickname of this weapon is Mecha-killer, which goes perfect with it.

It is the most unique kind of weapon in Super Mecha Champions. It fires walking robots which have the ability to track the nearby targets automatically and can explode when anything comes into the closer area to them.

This weapon shield is optional, like giving you the freedom to use it or not as per your choice. You can use it during the final stage of the battle when only human form left and there is an only 1-1 battle. 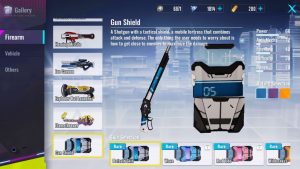 Hopefully, this guide of the weapons in Super Mecha Champions will help you to learn which weapon to choose to deal with that situation. 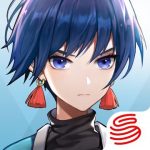